Ninety-one years ago a small cast iron and steel lighthouse sent its beams of light and tolling bell into the fog and dark on the Hudson River. The lighthouse was painted red and sat on a rocky projection on the edge of the treacherous river currents. By the time The Little Red Lighthouse and the Great Gray Bridge was published in 1942, the lighthouse had been decommissioned for a decade, made redundant by the completion of the George Washington Bridge. But the children’s classic is a romantic tale of a plucky little lighthouse that owns the river and beams out confidently, saving steamers, tugs and all the river traffic from a disastrous end on the rocks.

And then, one day, a bridge begins to rise on the banks of the river, a monstrous gray edifice that dwarfs the small lighthouse. What happens next is delightful fantasy and very satisfying for small children who love to root for the underdog. There is just enough threat, loss, peril and redemption to be exciting without being too scary. And the book has a few facts about rivers and what they carry–added to the history, you could call it educational. In fact, should you really want to cement the lessons, and should you live or visit anywhere near the Upper West Side of Manhattan, you could stop by the side of the road and walk down to check out the real Little Red Lighthouse. The city restored it on the fiftieth anniversary of the opening of the massive bridge that spans the Hudson and dwarfs the tiny structure. If you contact the park rangers, you could arrange for a tour, climb the winding stairs and look over the river from the catwalk.

The lens no longer beams out its warning on the night river and the lighthouse is almost hidden by the gray bridge towers. But it’s charming, a reminder of simpler times when ferries, not spans clogged with cars and trucks, transported travelers from New York to New Jersey, and something as small as a red lighthouse on a rocky promontory could play a big role in river traffic.

Lyndsay Faye’s The Gods of Gotham is terrific history and terrific crime fiction. It’s 1845 and New York City is a sprawling, brawling mess. Slums abut fine townhouses, corruption is the rule of law and the last word in politics, the virtuous hate the bawdy houses, the Whigs hate the Democrats and everyone hates the Irish. When a disastrous fire destroys the oyster bar where he worked and the apartment where he kept his life savings, Timothy Wilde thought he had tasted the worst of it.

But his big brother Valentine, a drug-addicted, politically notorious firefighter, finds him a job as one of the new “copper stars,” a nascent police force that isn’t exactly welcome in the wild west of the crime-ridden wards. The loss of his savings means Tim can’t ask his lifelong love Mercy Underhill, a preacher’s daughter, to marry him. The horrible new scars on his face make him look like a ruffian, Valentine has always been a fight waiting to happen, and fire spooks Timothy Wilde–his parents died in the fire that destroyed their farm and orphaned the brothers.

Pretty soon the new job spooks him, too. He finds decent lodging over a widow’s bake shop and discovers he is as good at figuring things out as he was at listening to the customers in his bar. Despite himself he begins to get interested in policing his ward–and then a small girl in a nightdress, covered in blood, flies out of the night and crashes into his life, setting off a conflagration more horrible than any fire.

Bird Daly has escaped out the window of the brothel where she lived. She’s an accomplished liar and so winning that Tim is completley captivated by her. But she knows things she won’t tell and she is frightened. The bloody nightdress is finely made and goes unexplained. Tim decides not to send her to the infamouse children’s refuge and stows her in his boarding house instead. But Bird is the beginning of a tale so bizarre and depraved that it could tear the city apart. Wilde is in it up to his neck and what he finds out shakes his faith in everything he believed about his world.

Wonderful characters. Great dialog–Faye uses colloquialisms of the time and the language is so foreign that she posts a glossary at the beginning of the book to help you figure it out. Manhattan is its own colorful self–decadent, demented, fabulous and roiling with racism, rough talk and even rougher behavior. Children are pressed into service as prostitutes, abandoned to the streets to work as pickpockets or newsboys, as calculating as hardened criminals and as vulnerable as the victims they too often are.

Someone is fanning the flames of anti-Irish sentiment and the new “coppers” are in danger of being dispersed before they ever solve any major cases or clean up a fraction of the filthy streets. The Gods of Gotham is full-on and non-stop. I loved it. I hope Faye plans a few sequels that are just as strong and irresistible as this introduction to New York’s Finest in a chapter of the city’s history that was anything but fine.

The Gods of Gotham

Every year, on the anniversary of a little girl’s suicide, someone draws a chalk figure–the outline of a small body–on the flagstones beneath the private school where she landed after a plunge from the roof. The school’s longtime caretaker leaves it there all day, cleaning the patio at nightfall. Phoebe Bledsoe, a descendent of the school’s founder, lives in a cottage on the grounds on New York’s Upper West Side, witnesses this annual reminder of a child nearly erased from memory and communes with her own ghosts. Chief among those haunts is her school friend Ernest who was strung up in a tree in Central Park, when Phoebe was eleven, and left to die.

As The Chalk Girl opens, a startling swarm of rats attacks tourists in Central Park, terrifying and eventually consuming an elderly school group leader. A small red-haired girl, who knows an astonishing amount about the anatomy and habits of rats, attaches herself to the group with open arms and a big smile but is grubby, filthy and rebuffed. Rats and red rain fall from the sky and the fairy child claims her uncle has turned himself into a tree. Carol O’Connell has created another Mallory mystery, full of weird goings on, distinctive characters and murky motives.

Kathy Mallory, the damaged runaway who was fostered and tamed by a beloved New York City detective, is the brilliant and somewhat lawless star of these books. She has become a homicide detective herself, a remarkably effective one. But she is a cold, efficient and unstable woman whose skills as a computer hacker and ability to psych out and intimidate bad guys solve cases even as they keep her colleagues at a distance. When bodies are discovered suspended from trees in burlap bags, Mallory (she refuses to let anybody call her by her first name) and her partner Riker set out to find the red-haired kid who may be a material witness to murder.

The Chalk Girl is just plain good. O’Connell doesn’t even give you time to fasten your seat belt before she hits the accelerator. It’s a wild ride but all a reader has to do is hang on. The events and characters are intense, surprising, funny and appallingly nasty. The grubby kid is a key and Mallory locates her, recognizing an unusual psychological pattern, Williams syndrome, immediately. As the child attaches herself to the aloof detective, more bodies are found in trees, old felonies seem to relate to the latest atrocities, the money trails of influence and extortion that devil city politics and preoccupy the wealthy are revealed and many suspects for numerous crimes surface. Throughout, the twisted character of Kathy Mallory keeps thing more than lively. Mallory could be the original model for the damaged heroine of The Girl with the Dragon Tattoo–badly impaired emotions, high-functioning sleuthing, inspired and slightly scary tactics.

It is tough to sort it out in advance of the big reveal at the close but, fortunately, you don’t have to. The incidents are so entertaining—a few in an appalling way—that the story plays out like a movie. Fierce and fearsome Mallory has a soft side which she shoves out of sight at every opportunity. A tiny child is traumatized by her own kidnapping but game to keep trusting strangers, sharing her immense but quirky scholarship and her exceptional musical ability with anyone who crosses her path. The clues and malevolence form a thicket as dense as Central Park’s wooded Ramble, where the tree people are found. And O’Connell has pulled off another gripping read with a partly likable but endlessly fascinating heroine who always dishes out far more than she takes—and does it with admirable style.

The Chalk Girl (A Mallory Novel) 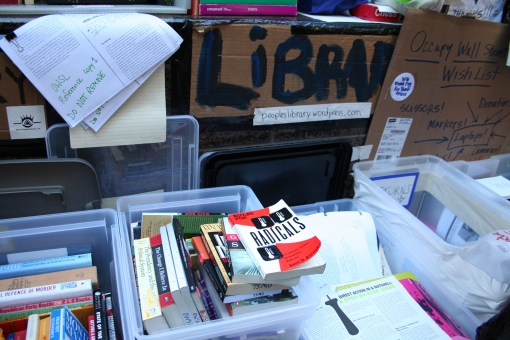 Libraries are the repositories of the soul of our societies. They hold the wisdom and follies of ages, portraits and snapshots of who we were and are, predictions of who we will become. They are sacred spaces because they are where we keep our stories. Libraries have shelves and shelves of bright keys to imagination and imagination is how we create our worlds.

I have always wanted the entire city of New York to become a library: empty storefronts full of books to borrow with corners for nannies and parents to read to toddlers, book-borrow stands like newsstands on every street, beautiful old buildings like the St. Agnes library in every community, mobile libraries cruising commercial strips and neighborhoods, a free library in every corporate building and condo lobby, library kiosks in the parks. If Gotham dedicated its resources to transforming the city into one huge library, we would be the most literate, intelligent, imaginative, tolerant, peaceful and positive metropolis on the planet–no end to the possibilities.

My favorite energy spot at the Occupy Wall St. encampment in Zuccotti Park is its library. The existence of the OWS People’s Library speaks volumes (even Shakespeare had no problem with the occasional pun) about the mindset and motivation of the 99% protesting in the park. You can donate books. You can borrow books. You can even keep books if you promise to pass them along to someone else when you have finished them. You can sit and read a book. So one day, shortly after my first visit to the library, I did. 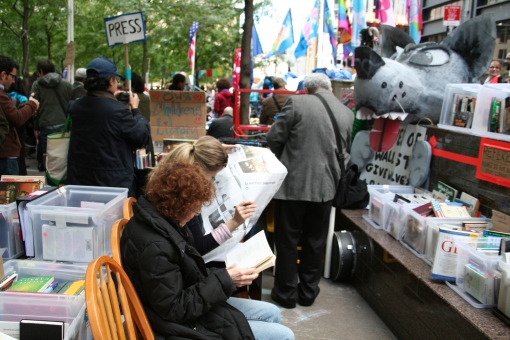